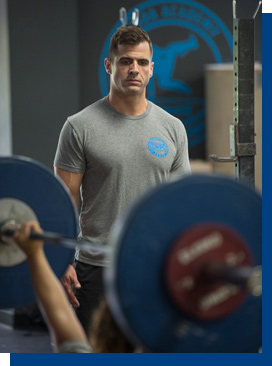 Wil Fleming is a sports performance coach and weightlifting coach in Bloomington, IN. His expertise comes from years of training and coaching athletes in multiple sports. His athletes are routinely the most explosive, fastest, and strongest on the field.

Wil founded and owned Force Fitness and Performance in Bloomington, IN from 2008-2018. Force boasts an impressive track record of success with 100 + athletes earning Division I scholarships and nearly 225 athletes moving on to compete at the NCAA level in Division I, II, III. Athletes from professional football, basketball, baseball, soccer and track and field trained with Wil and his team of coaches at Force Fitness.

In 2018 Wil sold Force Fitness and Performance and founded 1Kilo. 1Kilo specializes in Olympic Weightlifting coaching for athletes in person and online.

In addition to being a business owner, Wil has been an author of numerous books and training products for athletes and weightlifters alike including Complete Olympic Lifting Handbook. Wil is the creator of the Certified Weightlifting Performance Coach Course, with nearly 1000 certified coaches around the world, using his teaching progressions. Wil has also contributed to publications like Men’s Health, Women’s Health, and T-Nation.

Wil is a sought after speaker on the topics of power development, speed, and strength training for athletes. He has spoken at the Complete Speed and Power Summit (2016, 2017), NSCA National Coaches Conference (2017) IYCA International Summit (2010-15), National High School Coaches Association National Conference (2015) the Midwest Performance Enhancement Seminar (2011,2014), Building Better Athletes Seminar (2012), the College of the Canyons Strength and Conditioning Clinic (2012), and in Europe and Latin America (2013, 2015) If you would like to have Wil speak at an event contact him below:

Prior to being a business owner, he was an Olympic Trials participant, an all-American athlete, and the school record holder at Indiana University as a hammer thrower. Wil was a resident athlete at the Olympic Training Center in Colorado Springs for Olympic weightlifting after winning a Jr. National Championship in the same sport. He currently competes in weightlifting competitions periodically. He is the 2017 Masters (35-39) 85kg National Champion and 35-39 Best lifter, 2018 world silver medalist and holds the national record in snatch, clean and jerk, and total in the 35-39 85kg class.

He lives in Bloomington, IN with his beautiful and supportive wife, Ashley, and their sons Jack and Franklin.