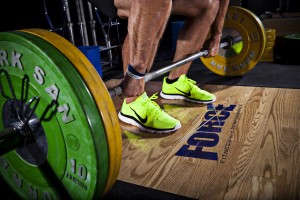 Left to their own devices, athletes can be there own worst enemy. Actually, I am going to expand that statement.

Left to OUR own devices, most people make some really bad decisions in the weight room. Not “bad” like mid 1990’s Mike Tyson, but definitely getting in the ball park. It’s one bad decision after the other. This problem isn’t just one for novice weightlifters, and athletes, I, and you are just as guilty.

Sometimes we have no clue how to pick weights in our Olympic lifts.

If it were up to us we would just work up to a weight, do it, then pick another weight and maybe miss it, maybe make it and then repeat.

Most athletes that I work with for the first time miss weights like it is part of their job description. They have no clue what weight to use to get the effect they need.

I have 3 solutions that I use regularly:

The bodyweight method, for novice and first time lifters.

The work-up method, for everyday use and just past novice lifters.

The percentage method, for some serious training goals.

The bodyweight method is for use with novice lifters and is as simple as it sounds. Rather than working to achieve 1 repetition maximums in lifts that the athlete is not familiar with performing, we base all weight used on the current lean bodyweight of the athlete.

This method dominates the first 4-6 weeks of programming for athletes that are new to the lifts and goes like this.

This method allows athletes to spend a significant amount of time on developing movement efficiency of the specific patterns about which we are concerned. While many athletes will snicker at the notion of never going heavier than 50% of their own bodyweight, this is the exact method that I first used when training as a novice lifter. This is also the method that I use to load lifts for most novice lifters in my care. Every session is started with 30-50 reps with only a bar and the entire workout is completed with 50% or less of the athletes’ bodyweight.

The work up method

The work up method is one that I use for any non-novice lifter for whom I do not know their current 1 RM.  This method allows for great freedom in the weights used on any given day, but will always dial in to the perfect weight on a given day.

There are no specific percentages at which an athlete should be working when using the work up method. Here is how to implement it to get the most out of an Olympic lifting program

First, work up to your best set of the given reps on any day you are training.  Some days will be better than others, but always work up to your best set that day with perfect form. Then you would count your sets backwards and count any set within 10% of your best as a work set. So for instance, let’s say snatch was prescribed for 4 sets of 3 reps and you  snatched the following sets:

On this day you would count the highlighted sets.  Each of these sets falls within 10% of your highest load on the snatch that day.

If for instance you did the following sets on a snatch workout you may have to add another set below your highest weight to get the right number of work sets in.

Because only 2 sets were within 10 % of your best on that day you could do the following to get the appropriate number of work sets.

The work up method allows for high intensity training at the best level an athlete can reach on any given day. For large groups of athletes with varying levels of confidence and competence in the Olympic lifts this is an ideal method to use.

At the collegiate level I used this method for nearly every repetition I completed. I trained in a group of other throwers and our strength coach rarely prescribed intensities, it was a known concept that each day was to be done at the highest intensity possible! I used this method on my way to the best lifts I ever completed: a 320 lbs snatch and a 402 lbs clean and jerk. Big weights can be had using this method for motivated athletes.

The percentage method is most commonly used with elite level weightlifters and athletes. This method uses known 1 repetition maximums and specific percentages to prescribe training loads.

In a given training period the goals for the completion of the training cycle should be known. That is, what numbers would the coach and athlete like to hit by the end of the cycle. From these numbers all weights will be based.

The 100% snatch number is the first number to be used. This number is for the full snatch, started from the ground and received in the low squat position.

All snatch exercises will be based off of this number, snatch pulls, power snatches, hang snatches and block snatches will come back to the 100% snatch number.

Power snatches from any start position should be about 80% of the full snatch number. Snatch pulls and snatch deadlifts will be done at somewhere around the 90-110% level.

Weights at 60-80% of the snatch maximum will be used to enhance speed, and with higher repetition sets.

The 100% clean and jerk will be the second number that must be known, and is typically around 120% of the snatch maximum. Again clean and jerks, power cleans, power jerks, push presses, split jerks, and clean pulls will be based off of this number.

Prilepin’s table, designed by former Soviet weightlifting coach A.S. Prilepin can be used to closely predict the sets and reps used at any level of intensity. There are much more in depth guides to the appropriate weights to use, but the table created by Prilepin many years ago stands up to the test of time very well.

The percentage method would guide you on days that you are seeking max effort, or dynamic effort lifts, and is the most appropriate method to use for advanced trainees.

Put a Bow on it

These are the 3 primary loading patterns I use for training the Olympic lifts. These methods cover most athletes that you can work with. From the novice, first time lifter to the much more experienced athlete using one of these methods will do the trick to make athletes start hitting their lifts and getting the results you need.