Sometimes you just love something and cannot get enough of it. Maybe it’s your dog, I’m sure he is all that. Maybe it’s cookies, who am I to judge? Maybe it’s Lifetime movies of the week, seriously I am not judging. In my life that “something” is the snatch. I love doing the lift, I love coaching the lift, and I love trying all the versions of the lift that I can think of. The snatch is numero uno in my book.

Before we dive into all the variations lets talk about the basics.

The hang snatch is the meat and potatoes of the snatch training that I do with most athletes. It is by far the easiest version of the snatch to learn and has the most transferability to athletics. If we are being honest with ourselves, and we always should be, we can see that the second pull of the snatch is the big reason we do this lift. There are plenty of other reasons and great benefits to the movement, but when it comes to athletics we are looking for movements that help athletes build power.

The second pull of the classic snatch creates a lot of power (over 2000 W depending on the load and the athlete). The second pull of the hang snatch creates even more . Yep that’s right, the hang snatch can create even more power than the full snatch, almost 50% more (1). The implications to this means that most athletes will not only benefit from the movement that is much more relatable to their sport, but also one that provides even greater power benefits.

Why you should be doing the hang snatch:

This snatch is the right thing for most athletes. The learning curve for the athletes that I teach is fairly short. Athletes that I work with can have a really safe, and effective movement down in the first week of training. This doesn’t mean that they are competition ready, but they are doing a movement from which they can gain a lot, that looks really close to an awesome snatch. Athletes that need power from a bilateral stance should be doing this movement: Track and field throwers, football players, basketball players, volleyball players. soccer players. Pretty much if they need to jump, they should do this movement.

The power snatch is an awesome movement for athletes that are ready, but recently I have seen it butchered Some groups of people have taken to calling this movement something terrible. Something that makes my blood boil as I think of the horror. This movement is not “ground to overhead.” That would be like calling a Mozart Concerto “bang on some keys,” or Rocky IV, “some 80’s movie”. The power snatch, like Rocky IV, and like Mozart is a work of art. The power snatch is highly technical and not for beginners. Okay we got that out of the way.

The power snatch does require a ton of mobility. It is seriously hard to maintain a neutral spine in the low squat with hands at a typical snatch grip. As great as 90% of the athletes we work with don’t initially possess this much mobility at the hip. Plenty of them develop this as we go along, but if you are on a limited time frame I would stick to doing hang snatches. In the cases in which you deem it necessary to work on starting strength and go from a power snatch there is an easy fix if an athlete does not have the requisite mobility. Just elevate the movement on a box or another bumper plate. As little as 3-6” of elevation can let most any athlete take advantage of the strength and power benefits of the power snatch.

If you have the long term opportunity to work with an athlete and are able to coach an athlete to a full snatch, you will develop an athlete that is solid like an oak in the core and upper body, has legs like pneumatic jacks, and the mobility of a cobra snake! On a sadder note we rarely have the opportunity to train athletes long enough to develop the full snatch, unless they signed up to be an Olympic lifter. 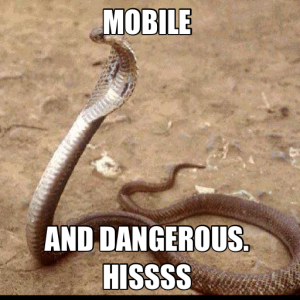 I call the full snatch a variation and progression of the hang snatch rather than the baseline because of the order in which I prioritize this lift. I rarely have my athletes train with the full snatch. It’s just too involved to be of any benefit to athletes in the short term. Despite its low priority in my training programs the full snatch is my favorite lift to coach, and to train with personally.

Why you should stick to the hang snatch:

Successful completion of the full snatch, brings into play something that we do not often talk about as a necessity for general athletes. Rather than just focusing on the 2nd pull of the lift, becoming great at the full snatch means that the athlete must be equally adept and even faster at getting under the bar. This is the equalizing factor that takes good lifters to great lifters. While there is something to be said for the ability to “super stiffen” (as McGill calls it), our focus for using the snatch with everyday athletes should be on developing the explosive power of hip extension, not the efficient pull underneath the bar.

The close grip snatch is a cool variation on the snatch that can be done from the hang or the floor. Doing this movement from the hang is similar to the snatch and clean from the above knee start position. It can be completed from the floor because it requires less mobility than the wide grip position of the traditional snatch.

The traditional grip of the snatch puts the shoulder of the athlete in a position of instability that can sometimes lead to injury. Extreme abduction, flexion and external rotation at the shoulder leads to instability and a greater potential for injury (2). The close grip snatch can alleviate these concerns. From a purely observational standpoint, the close grip snatch leads to less “swinging” of the bar in novice lifters than the wide grip of the traditional snatch, which will further assist in reducing shoulder instability.

Why you should stick with the hang snatch:

After reading that last part, I have to say the clean grip snatch is pretty awesome. It really is, but I still like the normal hang snatch. The close grip snatch is harder to complete for many athletes. The close grip means that the pull on the bar must be a lot higher to have a successful lift and the position overhead actually means that athletes without a great deal of thoracic extension will struggle to hold a good position overhead without compensating with the lumbar spine. There is slightly less potential for power because the loads will typically be less than the traditional grip (because the pull has to be higher).

The split snatch from the hang position is the most athletic movement that you can have your athletes perform in the weightroom. It features the same pull as the hang snatch, but also forces athletes to vary their athletic stance to receive the bar overhead. The receiving position is where we see great benefit. The forces in the receiving position closely resemble those of the leg striking the ground in sprinting or landing on one leg from a jump (1). This can be beneficial to nearly all athletes.

Why you should stick with the hang snatch:

Quite simply the loads will be much lower for a great period of time as the athletes get accustomed to this new movement pattern. The split snatch is a “must add” to your training program but cannot replace the hang snatch entirely.

The muscle snatch is the least explosive version of a snatch that you can perform. It is an excellent movement to develop greater strength and augment power training. For a big time breakdown of the muscle snatch check out this article I did a while back: MUSCLE SNATCH

There just isn’t enough power generated in a muscle snatch to be appropriate to replace the hang snatch entirely. This movement can be used to assist an athlete’s ability to perform the snatch.

The rotational snatch is a legitimately awesome move that trains power through the transverse plane like little else that we can do in the weight room. I choose to use a sandbag for this movement rather than a barbell because the load is centered over your body rather than towards the ends of the bar. A centered load will help to eliminate the rotational forces that you might encounter and struggle with if the load were on a barbell. With this movement it is important to think of the role of the lumbar spine and core being to re-direct force from the lower body to the arms. Your core should remain stable throughout.

Pretty obvious reasoning here, power in the transverse plane should be trained but not in the absence of power in the sagittal plane. Include them both in your program and become a powerful beast!

These are the most important and most used snatch variations in my facility. Each has an important role in the progression of the athletes that I train. The ability to perform each of these movements will lead your athletes to a greater skill, and power.