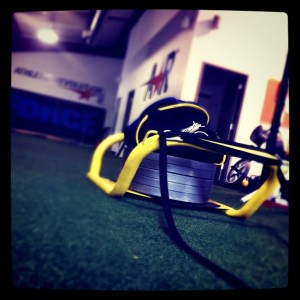 The sled does suck, a lot, especially the way it is used in most instances: bent over, head down, puke muscles working in overdrive. I am here to tell you though that there are more uses to the sled than what you likely do everyday.

There is a place for explosive, fast pushing of the sled. We use it all the time for speed training and even in conditioning for our athletes (with tons of rest in between). These should be a part of your program, but just getting down on a low sled and pushing until someone pukes isn’t an effective way to train athletes.

In this post I am going to share with you the novel uses that are going to teach your athletes better locomotion patterns, challenge their entire body,  and help them improve their game.

So sit back and relax while you read it, but get ready to do some serious work as you put these to use!

For athletes needing more upper body power, there are not very many movements that are better than the drag and press. This movement combines skills that are likely linked on the field of play in a way that not much else can do in the weightroom.

Using the sled in this way also shows just how strong the linkage between the lower body and upper body actually is. At the moment of explosion athletes with weak links will be exposed.

This is a great tool to reveal where the athlete needs more work elsewhere in the gym.

So much attention is paid to starting speed and acceleration but often that energy is focused on movement that is straight ahead, and only straight ahead. While this is important, training athletes to accelerate rapidly in all directions is equally important.

The crossover step is the best acceleration move that an athlete can make in a lateral direction and requires high degrees of power both in the frontal plane, but also in the transverse plane as the athlete will have to create rotation to move across the midline of their body.  Getting rotation at the hip is a large part in all change of direction movements. Anytime the athlete has to cross the midline of the body you are really going to challenge athletes neurologically as well, making them more adept and prepared on the field of play.

As soon as we bring in another implement sleds become an even better tool. Farmer’s carries are awesome to pair with sleds, but recently I have found a variation that I like even more to really get the core in overdrive.

Using the sandbag as our additional tool, we will have athletes hug the sandbag on one side in the tightest imaginable bear hug possible. This one sided load requires the athlete to resist lateral flexion (a good thing).  The physical motion of hugging on one side actually includes some anti-rotation benefits as well. Paired together this is an awesome combo that requires athletes to resist excessive movement in the core while maintaining a steady locomotion pattern.

Marching with a Sled

It definitely doesn’t look much different than the typical use but the application and purpose of this drill is far different than the traditional sled push. Marching with a sled is a super effective way to develop strength and even power. Load the sled up with plenty of weight (like more than you even want to carry to the sled) and start pushing. The tempo of the march will be slow, but the effort with every individual push should be maximal.  I imagine being on an old spin bike with the tension turned up as high as it goes, you may only get 20-30 steps per minute but every time you push it is a bear.

Marching is great to use as a strength tool when athletes have a restriction that may keep them from squatting. We use heavy sled marches as a tool to teach athletes the mechanics of acceleration, by ensuring they are in the right body angle before beginning.  This method is also an amazing tool to use for continuous conditioning methods such as High Intensity Continuous Training as outlined by Joel Jamieson or for pure cardiac output.

Make the result of your sled training suck less and still keep the suckiness of the actual use of the sled up high with these variations. The sled shouldn’t only be used to make people puke,

How often should you PR?
November 22, 2017
Performance Pod 48: Kinetik SC-Strength and Conditioning in the Middle East
November 11, 2014

Earning the Right to train Overhead: Eric Cressey on the snatch
October 22, 2013