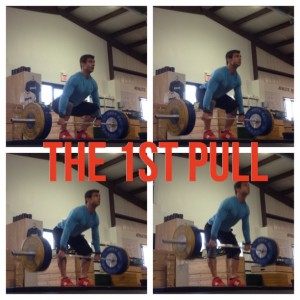 The snatch too, but I don’t want anyone to make anyone feel like they’re inadequate and “do EVERYTHING wrong.”

The first pull is where most errors occur, and a big reason why I teach my athletes to get really good at the hang power clean before we even attempt to move the bar to the floor. I have spent most of my time on the platform working on making a better first pull.

If we think about the entire lift, the 1st pull makes up a small portion of it. Books have been written on each, but just quickly, 8 different things must go correctly in a good lift.
• Set up position on the bar,

• The transition around the knee

• The movement under the bar

• And the little detail of actually standing up with the weight.

Eight things, and it could be plenty more, but regardless there are lots of things going into a good lift. With the math prowess we gained before the age of 10, we might discern that the 1st pull accounts for 12.5% of the lift.

Our elementary school math background betrays us, in this case, because the truth is that the 1st pull accounts for 50% or more of the clean.

Get the first pull right and you have a chance. Get it wrong, and your chances of putting together a good Olympic lift are 0%

What are you doing wrong?

A rudimentary coaching cue for the clean, and one that I still hear pretty often in high schools or gyms, is to use the old line, “the shortest distance between 2 points is a straight line”. While this is an excellent point to make to those people who will one day want to take a voyage across the Atlantic ocean(definitely a straight line), this cue doesn’t do much to create a good first pull.

The straight line or vertical line from the ground is definitely better than some alternatives. It isn’t the best we can do.

An efficient lift will place the mass of the lifter barbell system over YOUR base of support, which should be in line with your mid-foot.

This small problem, the vertical pull from the ground, isn’t that big of a deal until later in the lift. You might not even notice it, like Vin Diesel in Saving Private Ryan, everything is going well, until you realize “the Diesel” can’t act and he’s in a movie with Tom Hanks (who can act), and your first pull put you way forward of center.

The second problem is counter intuitive: Going too fast.  The Olympic lifting first pull should be slow. All you are doing is setting up your second pull. To make a fast second pull, you need to have time to really put some power in it, and if the bar is going too fast after your first pull, you don’t have a chance.

You see problems with your first pull don’t effect what you are doing right away, they mess up the rest of your lift.

The ability to put the correct first pull from the ground on the bar means that you must get in the right starting position, before doing anything else.

A lot of coaches teach a close to parallel back position to the ground, with the chest way over the bar and arms inclined back toward the body.

While some coaches, teach an extremely vertical torso position in the set up position and the arms almost inclined forward.

As a classic toe the line kind of guy, I choose the middle ground between the two extremes. Not vertical, not horizontal. 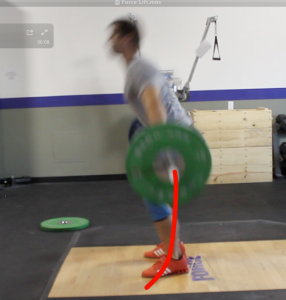 The appropriate angles of joints is very dependent upon the body proportions of the lifter in question, so I won’t speak on those, but regardless of size and weight the constant in elite weightlifters is the angle of the torso in relation to the ground. When the bar breaks contact with the ground, the torso should be 32-35 degrees above horizontal.

Once you are in the right set position, the goal is to achieve a bar path that is conducive to lifting big weights. This means that your only job is to create a tight lifter barbell system.

Creating the tight system means using an “S” pull. The S Pull brings the bar towards the body at lift-off and this path should continue until the completion of the 2nd pull.

How to create the right 1st pull

The motion off the floor needs to be exacting to create an advantageous pull. Here are the 4 steps that I take to make the classic S Pull

Chest up: On the floor you will often see athletes start the snatch with their torso’s near vertical in the manner of a rocking start . This is a great strategy to use so that we can begin in an “over-corrected” manner. Upon breaking the floor, the torso angle is nearly a constant in good weightlifters. Here’s a vid of a rocking start in the snatch

Knuckles down: This seems small, but your hands really are your only connection with the bar. Having them in a poor position will irreparably harm your ability to pull the bar from the floor.

On the bar, have a tight grip, knuckles down and back (towards your body), your lats will be engaged and the bar will move back towards you.

Push the ground: Initiate the pull by maintaining everything and pushing the floor with your feet. A solid chain is important here, otherwise you will push and your body will break before the bar breaks the ground.

Chest stays up. You push. Everything, good.

Butt back and up: The actual movement of your hips will not just be vertical, but rather vertical and towards the rear. Think of driving your hips up AND back. This motion serves the purpose of straightening the knees, which is essential to make the smoothest transition past (not around) them later.

There are a lot of things that go into a good overall lift in the clean and snatch but none are more important than the first pull. Get it right and you have a shot at making a good lift, get it wrong and you are better served to put the bar down and start over.