Well not this bad...

If you read my “30 Lessons in 30 years” post from a couple  weeks ago you read that I had never deadlifted until 3 years ago.  My first 12-13 years of  training were always spent picking up weight with the intent to take it over my head or to my chest. My first several years of training athletes were very devoid of deadlifts as well, due to my limitations in having experienced the lift.

While I have moved some decent weight in this Olympic lifting fashion, my ability to deadlift is severely limited (AKA “sucks”) because of my Olympic lifting patterns  I haven’t deadlifted all that much more than I have cleaned.  My single best clean is 182.5 kilos (402 lbs) and my best deadlift is around 200 kilos (440lbs).  If we get all math-y that is only a 10% difference.

This problem goes the other way as well, those experienced in the deadlift will end up with the bar out of position in the Olympic lifts if they employ the same technique they use in the traditional strength lift.

I think that it is important to clearly identify the intent of the 2 lifts, so that we can find a frame through which to view the lifts. The Olympic lifts carry the intent to be as explosive as possible, while the deadlift carries the intent to lift the maximum weight possible.

Right away some people will  argue that the intent of the Olympic lifts is to move the maximum weight possible as well, and the difference is only in the position at the completion of the lift. That simply isn’t the case because there is an inherent quality to technique that must remain in the Olympic lifts no matter the weight.  Even the heaviest Olympic lifts maintain great technique.

I don’t want to call anyone out, but just search youtube for clips of world record deadlifts and world record Olympic lifts.

After watching these clips, I doubt you would coach any of your athletes or any of your clients to deadlift in the way that maximum attempts are taken in this lift.  I am just as sure that you would be a very happy coach if your athletes looked like those that are attempting world records in the clean or snatch. This is the inherent quality that must remain intact to complete these lifts.

We aren’t talking about world record attempts when coaching everyday athletes, but this difference in intent makes the two movements from the floor look very different.

Lifters trying to move as explosively as possible will need to get in a position to move explosively above the knee.

The first apparent difference will be in the set up of the lifts.  From the set up we can see differences in the two lifts right away, one going for maximum explosion later and one going for maximum weight. The Olympic lifts, in profile view, show the torso at a lower angle and the chest will be in front of the bar.  The shoulders should actually be in front of the bar either at the start or immediately after. (It should be noted that when I set up, I am at a very extreme angle before dropping into the start position).

The deadlift in profile view is a much more “vertical” lift.  The arms are straight up and down the shins are more vertical and the torso is even closer to vertical, even when angling the torso forward more to make the movement feel less like a squat there is a vertical feel to the movement. 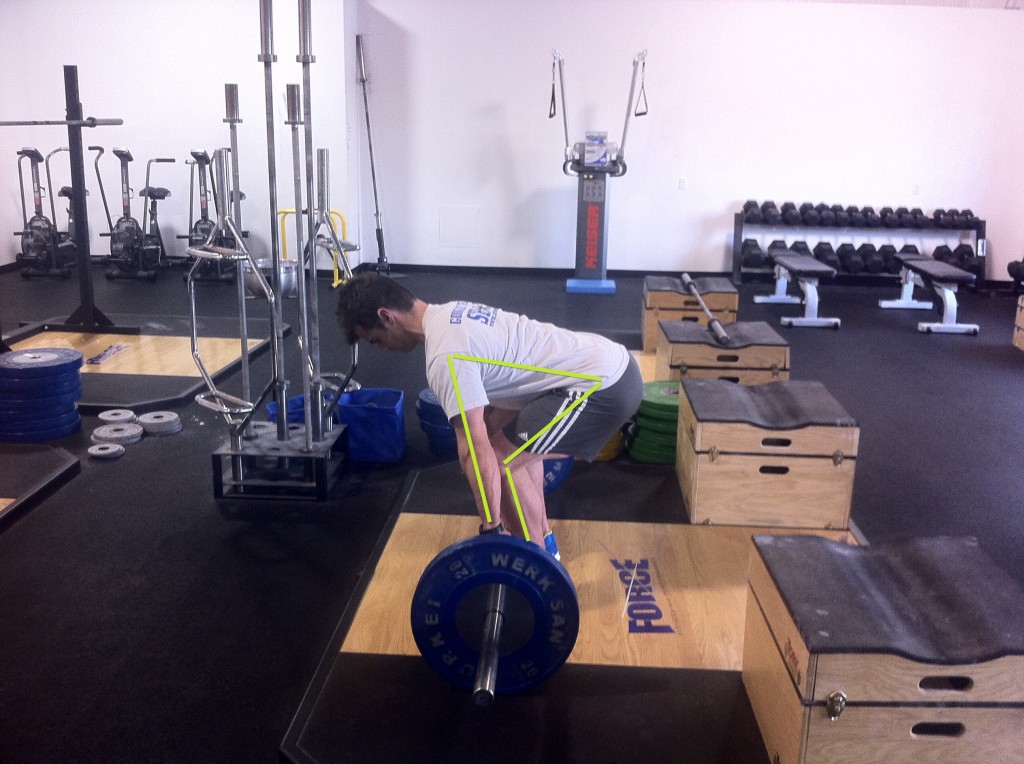 Set up position for power clean 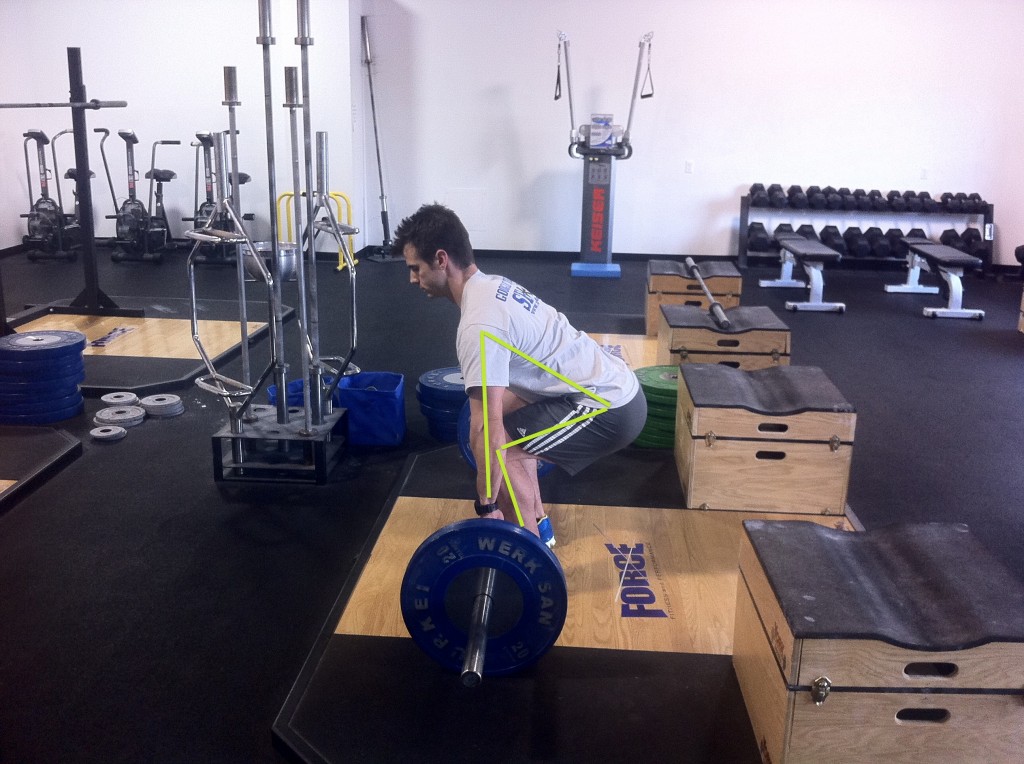 The set up position for a deadlift.

The path of the body

Some people reference the difference in bar path from the floor but I think that to a certain level of proficiency  the path of the bar is very similar between the deadlift and clean.  Both will be “straight up” to a great degree and the bar being away from the body will make the lifts nearly impossible.

The real difference is in the path of the body.  In the deadlift the  body position achieved at the start should be “locked in”, meaning that the hips and the chest are linked  and move, as a unit, vertically. This movement is uniform throughout until completion.

The Olympic lifts have very different phases known as the 1st and 2nd pull and make the movement look very different from the deadlift. The 1st pull should set up the 2nd pull, by creating a loaded hips position above the knee.

In the 1st pull of the Olympic lifts, no matter the start position, the goal will be loading the hips. This is accomplished by pushing the knees back and allowing the hips to rise up. This move is in stark contrast to the movement off the floor in the deadlift.  If you are trying to move maximal weight this is a very bad position in which to find yourself.

Being explosive or being strong.

While I try to offer a distinction between the 2 lifts when I coach my athletes, the best solution might be to choose what it is that you want to get really excellent at doing.

If you choose to be strong have your athletes do…

Doing hang cleans over power cleans might be the right choice in general, most athletes have a difficult time getting down to a bar resting on the floor.  Whether that is the case for your athletes or not, choosing hang cleans will not allow your athletes to get ingrained with the pattern of the clean off the floor. This will lead to much better performance of the deadlift and is something that I have had to do with my own training over the last 2 years.

Trap bar deadlifts can be coached in a very similar manner as the traditional barbell deadlift however the difference in hand position at the start means that there is very little relation made in the movement patterns by your athletes.  This means that doing power cleans will not be affected by the trap bar deadlift. This is something that I have employed recently as I have begun training cleans from the floor more often.

The movement of a power clean off the floor and a deadlift, seem to be very similar at first glance. Experience suggests otherwise and may force you to make a compromise in your training while you choose whether you would like to strong or explosive.