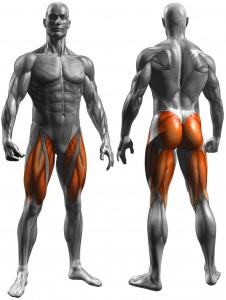 Olympic lifts are awesome. I am absolutely, %100 down with Olympic lifting. In fact, as long as injury doesn’t prevent it, my goal is to O-lift with every athlete I coach as soon as he or she is ready.

Browse around Google Scholar and you will find heaps of research confirming that adding Olympic lift variations are beneficial for increasing power output, vertical jumps, etc.  The O-lifts teach timing, coordination, and utilization of the posterior chain in a powerful manner (I use the term “hip snap”).

However, I work with several high jumpers, long jumpers, a few pole vaulters, and a ton basketball guys and gals. I’ve used depth jumps as a valuable training tool with the Indiana High School State Champion Girls Basketball team I train (kind of a big deal in this basketball-crazy state) and have a few girls pushing the 30″ vertical jump mark. They like jumping high during training. I train a 7th grade basketball player who is dunking! I like to see them not only be explosive on the court, but reactive.

As much as I love Olympic lifting, athletes need variety.  Multiple stimuli within a program or training block can really accelerate the training process when focused on the same athletic quality within the training block, and the athlete is given adequate time to adapt to the training stimulus (in other words, don’t switch workouts randomly every day for the sake of variety, but give yourself or your athletes time to master a movement and create a training effect).

While the title of this article may be dramatic, these things WORK!

At first glance, it looks as though the athlete steps off of a box and jumps really high. That’s because that’s exactly what happens! The beauty of the exercise lies in the simplicity.  I’ve watched some athletes increase their vertical FIVE INCHES in six weeks through a depth jump program!

I was first introduced to the depth jump, the main ingredient in the “Shock Method”, by Dr. Yuri Verkoshansky in the game-changing book Special Strength Training Manual For Coaches.

In the 60’s, Dr. Verkoshansky was a Soviet “Sprint and Jump Coach” (it’s kind of crazy how we separate the two nowadays).  After a short-but-sweet coaching career (he coached the European record holder in all of the sprint events and was then hired as a member of the Soviet National Track and Field Team), he turned his focus to scientific research in the performance field and grew a sweet beard to fit the gig.  He is considered The Father of Plyometrics, which is kind of a big deal.

There is no way I can break down Verkoshansky’s pages upon pages of formulas, charts and diagrams, but I will do my best to explain the basics.

Verkoshansky figured out that the depth jump utilizes the athlete’s falling weight, or kinetic energy, to overcome the strength effort, which triggers the coveted stretch reflex. After an athlete steps from a box and briefly free-falls, he or she violently springs up off of the ground, resembling rubber ball colliding with concrete. This impact and quick redirection of force is what Verkoshansky terms the “collision.”

This sharp impact triggers an adequate athletic body to quickly absorb impact and redirect the pull of gravity into a max effort vertical jump with minimal ground contact time.

Minimal ground contact time with maximum power output is key to speed, explosiveness, and change of direction in sport.

Depth jumps are absolutely, positively for advanced athletes only. I cannot emphasize this enough!

There is no age limit, training age, or formula I use to dictate whether or not the exercise is appropriate for an athlete.  Coaches and athletes must use common sense and err on the side of caution when deciding whether or not someone is ready.  Always educate the athlete and let them know that this exercise is “harder on their body than it feels.”

I often explain that a good set of depth jumps may not leave them sweaty and out of breath, but their nervous system and joints are definitely taxed.  It’s important to have a trusting relationship with the athlete (and to listen to your body if performing depth jumps yourself) and he or she should know to tell you instantly if the collision with the ground becomes painful.  Also, use common sense when watching or performing them: If it doesn’t look or feel athletic, springy and powerful…it’s not!

While a depth jump may seem like a simple, even easy task, it is one of the most stressful exercises one can perform! The muscles are obviously challenged, but the real gold in a depth jump program are the central nervous system and joint/connective tissue adaptations.  If an athlete isn’t ready for this kind of stress, if the prescribed volume of reps is too high, or if the height of the starting platform is too high,  he or she will get injured. Don’t butcher your athletes or yourself.

While I wouldn’t consider the depth jump dangerous by any means, there is a calculated (hopefully) risk a coach makes when selecting an exercise. No exercise comes without some kind of physical “price” paid by those performing it, and if someone isn’t ready for the stress, or can’t “afford” the depth jump, bad things happen.

The key to the depth jump is the lightening fast eccentric loading, extra-brief isometric/change of  momentum, and  followed by the explosive concentric contraction. Cal Dietz based his entire training philosophy on this concept and wrote a great book called Triphasic Traning.

Moral of the story: don’t rush into the depth jump. Depth jumps are one of the most useful tools in developing explosive power and speed, but an untrained or undertrained athlete would see a much more benefit from the basics: strength training, kettlebell swings and then Olympic lifting.

When and How to Program Depth Jumps

So here are the prerequisites I look for when programming depth jumps:

So once all of those things have happened, I start with a depth jump from a 12” box to box jump (height of the ‘box jump box” may vary depending on the athlete, but I usually start with 24”).

The next progression is the depth jump to hurdle jump.

The box jump minimizes the impact on the final landing, and also challenges the athlete with a proprioceptive target.  Cue the athlete to “spend as little time on the ground as possible” and watch the magic happen.

The hurdle jump preps the athlete for the second impact of the depth jump.

I like to spend two to three weeks on this progression, increasing the height of the starting box by 3” each week. Once an athlete looks like he or she is ready to move on, the next progression is the depth jump to vertical target.

This is where it’s all about reaction and speed through the collision and turning it into a crazy high jump.  We use a Vertec, but get creative if you don’t have one handy.  A basketball hoop (don’t get your fingers stuck in the net), a well-placed banner or flag, or even a higher ceiling all work.  People simply jump higher to a visual target, so take advantage (see below). I would encourage the jumps to be performed on turf or rubber flooring if possible.

Start with a 15” box and progress steadily each session by 3″-6″.   I have had elite basketball players and high jumpers progress to stepping from a 43” box!

Just like any other form of training, adequate recovery between sets and between sessions is crucial. I usually have athletes perform depth jumps in 2-4 sets of 10 reps, with 2:00-4:00 active recovery between sets (usually 1:00 recovery during beginner progressions).  I usually have athletes jog at a very light tempo or stationary bike just to maintain tissue temperature and occupy the 4:00, which feels like an eternity.

I program depth jumps at the beginning of a session, following a dynamic warm up that includes various jumping and landing drills.  At this point, the nervous system is likely as ready as it will ever be to train that session, so the most stressful part should happen then.  Plus, the fast-twitch fiber recruitment and nervous system priming carries over to the strength training that follows.

I always have the athlete jump from turf or soft grass.

I try to build “steps” with boxes for the athlete to walk up.

If the athlete seems to be slamming down on the final landing, I have them land in a deep squat to clean this up.

It’s important that both feet contact the ground at exactly the same time, even though the athlete steps with only one foot.