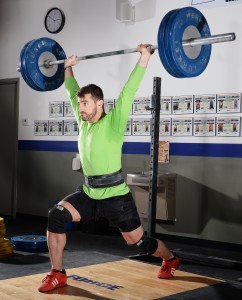 Through my almost 33 years of life on this earth I have realized that there are only 2 kinds of people in this world:

For many athletes falling into the second camp, this can be a constant source of frustration. The clean is the hard part, the jerk should be the easy part. I have always struggled with the jerk and have written extensively about it, so I am always looking for the best way to try to reward my hard work in the clean to complete the clean AND jerk.

The Jerk of the Future.

Recently, I was listening to the Commissioner’s of Power Podcast when one of the hosts asked the guest, America’s top weightlifter, Norik Vardanian whether the power jerk (Norik’s preferred style) was the jerk of the future. It had been initially said by one of the most decorated weightlifters in history, David Rigert.

Certainly as one watches the world championships you will notice more athletes than ever before are employing either the power jerk or the squat jerk. Vardanian himself competed in the 2012 Olympics using a split jerk but switched to a power jerk in the last year. So the question remains, is the power jerk the jerk of the future?

Before we get into the differences, and benefits of a power jerk vs. a split jerk we should talk about the similarities and needs of any jerk that you choose to do.

Rack support: Upon standing up from the clean the athlete should have a solid position of the bar resting on the shoulder, the bar should not be resting on the chest or wrists, but on the shoulders. This position allows the athlete to keep a solid contact with the bar as they begin the dip phase. The athlete can have the bar firmly in their hands (my preferred method) or on their finger tips. The elbows should be below the bar to allow for a more direct path to taking the bar overhead. The elbows should not be down at the expense of maintaining a solid position of support on the shoulders.

Dip Phase: The dip phase is the countermovement to begin to take the bar overhead. This phase should be completed on flat feet with a vertical torso. Forward bending of the torso or a dip on the toes will cause the bar to be moved forward. Typically this will mean a movement to the depth of a quarter squat

Drive Phase: The drive phase starts as the athlete changes direction at the bottom of the dip phase. The athlete should retain a vertical torso through this phase and drive through flat feet as long as possible. This means the athlete is prioritizing extension of the knees and hips over plantar flexion.

“Why do you guys split your feet to receive the jerk, it seems silly?” My wife asked that question to me recently, and it got me thinking.

The split jerk is the most common technique you will see when it comes to getting the bar overhead after a clean. For many athletes this movement is foreign and difficult. In today’s age of squat style cleans and squat style snatches, the split jerk is completely dissimilar to the motions of the snatch and clean. Certainly when the split snatch and split clean were employed there was direct carryover, but today there seems to be a serious disconnect. If watching local meets is any indication it is a source of frustration for a big percentage of lifters.

The split jerk is the style most commonly employed by world record holders and world champions. Off the top of my head at the recent world championships all men’s classes were won by split jerkers and a largepercentage of all competitors employed the split jerk (the notable exceptions include athletes Apti Aukhadov, David Bedzhanyan, and when competing Lu Xiaojun). The majority of individuals competing in local weightlifting meets also use the split jerk. It certainly has its benefits and is the jerk which I teach to most individuals when they begin weightlifting.

Splitting your feet to receive the bar overhead serves a dual purpose that is important for Olympic lifters.

The second and more important reason for splitting the feet is that the athlete is able to counter the forces that would be most likely to cause them to miss the lift. By splitting the feet the athlete can lengthen their base of support in the sagittal plane. The balance of the weights on either end means that there is very little risk of the weight being missed due to lateral forces, but by the nature of the lift, missing forward or back (particularly forward) is a potential problem. Splitting the feet can counter forces that would otherwise make the lift un-makable.

This also leads to the biggest problems of the split jerk, an athlete must be able to accurately balance between the 2 legs to support the bar directly overhead and not drive it forward and cause a miss. The splitting of the feet can be difficult to do accurately and more importantly, REPEATABLY.

The power jerk also allows the athlete to lower their center of gravity to receive the bar overhead, in this case very similar to the way that the COG can be lowered in the split jerk.

The primary benefit, and the one which I believe could be the reason that some have posited the power jerk as the “jerk fo the future” is that this technique allows the athlete to have a longer drive phase.

A power jerk of the same weight as a split jerk requires 13% more power to complete. With equal weights this means the bar must travel faster to be secured overhead in the power jerk. Immediately, off hand this would lead one to believe that the power jerk is harder to complete, but the power jerk itself lends theathlete to a longer ground contact time in the drive phase, meaning that this 13% difference is achievable for an athlete.

The other benefit of the power jerk is its simpler nature, the athlete does not need to think about the balance between the feet as they would in the split jerk. Instead it is primarily about dipping vertically, and driving vertically to completion. At the end of the drive phase there is no concern for where the feet go, just jump the feet to ensure a complete drive.

A power jerk may be limited by an athlete’s shoulder mobility, as the receiving position to secure the bar overhead may mean that the athlete must drive their torso forward and shoulders back in the locked out position. This cannot be done at the expense of a vertical dip and drive, however.

So which one should you do?

World record holders’ all over the world are probably not wrong about the split jerk, and I doubt we see a revolution at the world level where split jerkers all switch to a power jerk. It is certain that the split jerk is here to stay, but if you are an athlete (like myself) that sometimes struggles to end up in the right position with the bar overhead then the power jerk might be worth a whirl. It may just allow you to simplify your thought process enough to secure what is rightly yours, a PR clean AND jerk.