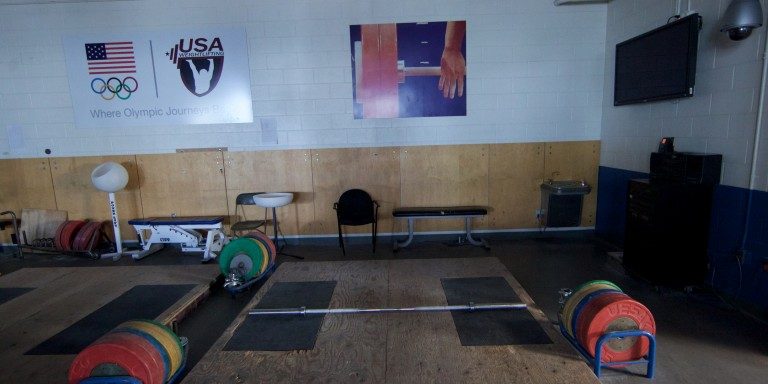 I recently read an article by a performance coach talking about how he coaches the Olympic lifts. His argument was that it is not correct to “jump your feet” in weightlifting. He didn’t go so far as to say it was out and out wrong, but in pretty strong terms he suggested that doing so wasn’t exactly the right thing to do.

His primary point of emphasis was that in the realm of “performance” we need great hip extension and by jumping the feet you will likely cut off your ability to extend the hips and instead will focus on lifting the feet.  I was all prepared to say “not so fast” and post countless pictures of weightlifters jumping their feet. The author tried to preemptively squash that by saying that in the realm of performance typical weightlifting technique might not be applicable.

Lets look at this from a couple angles,

Do weightlifters jump their feet?

Should we treat athletes and weightlifters differently?

If weightlifters jump their feet, why?

Do weightlifters jump their feet?

Some of this argument, “to jump the feet or not” comes back to the language that some coaches use. Many coaches, including myself use the terminology “jump” when teaching the Olympic lifts. Some say “jump and shrug”, I say “jump and punch”, or “jump and sit”. Several years ago plenty of weightlifting coaches turned against this terminology to suggest that the best lifters don’t jump their feet at all, or hardly move them, and the terminology was incorrect. In turn, we have people now trying to say that you don’t need to jump at all. 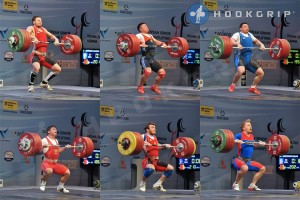 When looking at elite weightlifters a great number do actually jump their feet in some way, and nearly all of them reset the feet (either by moving them up and out or just out). Almost certainly the high school donkey kick jump that cuts off the pull is incorrect, but as I will point out shortly, jumping the feet in the right way should improve one’s ability to extend the hips.

Are athletes different than weightlifters?

This is an argument from the performance coaches all the time (by the way my primary job is to coach high school and college athletes), that weightlifters are different than athletes and you can’t take what the WL athlete does and apply it to the performance athlete.

I can say unequivocally that athletes are different than weightlifters, but the differences come not in how you coach them on movements, but on the program that you design (More on that in a future post).

Think about it for a second, elite weightlifters have pretty much perfected the technique of the Olympic lifts, should we then coach our athletes to technique that is less than what the weightlifter can accomplish? Certainly time restraints will mean that we probably can’t get athletes to exactly that level of technique, but can we be satisfied with  sub-standard technique because they are a performance athlete?

Why is jumping the feet important?

Jumping as a cue is pretty excellent for getting individuals to reach full hip AND knee extension (more on the  importance of knee extension in this post). While the actual finish of the pull is not exactly like a jump, the idea of jumping is very helpful.

The second part of jumping assists the athlete in getting under the bar. According to Zhekov in his paper Biomechanics of the Weightlifting Exercises (1976) the athlete must achieve a speed of 1 m/s in his descent to successfully catch the bar. By jumping the feet we now have the assistance of gravity to help us reach the required velocity.

Some elite weightlifters demonstrate what we would call an actual jump while others just reset the feet, both are designed to help the athlete move under and prepare them for the squat portion of the lifts.

While the feet remain in contact with the platform the body is best suited to increasing the vertical speed of the bar, both by pulling upward with the large muscles of the lower body and also the smaller muscles of the upper body. It is only when the feet leave the platform can the athlete successfully move under the bar.

Even when coaching the athlete that will only complete a power clean or power snatch it is critically important that there is a phase of “move under.” Doing so will allow the athlete to prepare the body to receive the bar in an athletic position as opposed to straight legs or the starfish position.

One last important note about jumping the feet and by extension (what many would call) stomping the feet. The audible noise of the feet re-hitting the platform is an important point of a good lift for most individuals. This noise signifies that the feet are meeting the platform in a balanced manner, that is the weight is distributed across the entire foot and not to the toes or heels. Again the point is not to MAKE this noise, but to have this noise because the athlete demonstrated balance through the pull and in the pull under.

For most individuals jumping will be a critical aspect to a successful lift. It can assist in both the finish of the pull as well as the ability to move under the bar. If you struggle with either aspect of the Olympic lifts or have athletes or lifters that struggle in these aspects try jumping the feet.