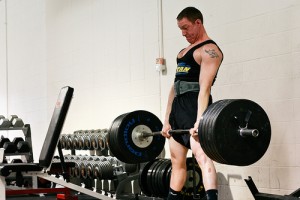 Q: Mike, the readers want to know, big snatch or big jerk? Which do you prefer?

In all seriousness, I’m not sure there’s anything more impressive than catching a heavy weight with the arms outstretched overhead, in the bottom of a squat, and then standing up with it.

Q: Advantages and disadvantages of neutral neck in O lifts?

MR: I’m not sure there’s a lot of downsides here. The biggest one I can think of is someone that has poor spatial or kinesthetic awareness is going to struggle with a more neutral/packed neck because they typically won’t have that one, constant point of reference.

The other obvious example is if someone doesn’t have a lot of anterior core strength (and therefore rely on the lower back) – putting them in a neutral position without rebuilding their strength and body will probably frustrate the hell out of them because they’ll be weaker and miss more lifts!

As far as benefits, though, they’re two-fold.

– Better able to load the glutes and hamstrings, which should lead to bigger lifts.
– More sparing to the lumbar spine. If you’re neutral in the neck, you should be more neutral through the lumbar spine as well. This will reduce stress on the facets and posterior elements of the disc.

I’m not sure it gets any better than bigger lifts and a decreased likelihood for injry.

Q: EST and nervous system recovery for weightlifting (a vague  but valuable question from Rod Root, one of my co-workers)

I’m not sure how much your energy system training is going to impact the ability of your nervous system to recover.

Instead, what I think EST could be used strategically for is improving your aerobic foundation so you can improve more quickly from a muscle/connective tissue perspective between training sessions.

Q: The life of an Olympic lifting program is the C&J, snatch, and squat, but what kind of accessory and strength work will help with the Olympic lifts the most?

This is the great debate isn’t is? Especially in the US?

Some coaches will say we need to have flawless technique, while others will say we just need to get stupid strong and build from there.

I think every strong O-lifter needs to build their base around the squat, as leg strength is the foundation for everything you do.

From there, though, I think a strong back and the ability to support a load with a neutral spine is critical. This isn’t powerlifting where you can muscle up a deadlift – your spine needs to be in a great position to develop a monster pull, but then to catch and support you in the bottom of a squat.

Big staples in my opinion would be exercises that train and reinforce this property. I’m a big fan of RDL’s, good mornings, and pulls to the knees with an ISO hold. All of these train the static posture of the back and give you the foundation to support heavy loads.

Q: One of the areas that is the hardest for new (and old) Oly lifters to learn is the low catch. What type of stuff would you recommend to help athletes achieve that low position?

Keep in mind this is coming from a non-Olympic lifter myself, but I’ve coached a handful in my day so hopefully this will help.

A few things to consider:

– Develop awesome mobility. This is priority one, because if your mobility sucks you will never be comfortable when catching a lift. Primary areas to focus on are the ankles, hips, thoracic spine and shoulders.
– Get comfortable in the bottom of a squat. If you try and bounce everything out of the bottom, you’re never really comfortable in the bottom/catch. Try using pause squats, paused drop snatches, etc. to get yourself strong and stable in that bottom position.
– Don’t have pre-conceived notions of your strength. I don’t care how strong you are when doing your pet lifts, it only matters what you can snatch/clean and jerk in a meet. It’s okay to drop the weights and rebuild yourself, with the intention of becoming stronger and more efficient in the long run.

Q: I (and all my athletes) want to hit it hard EVERY SINGLE DAY. What metrics, if any do you use for determining days to push it and days to back off and work on technique?

This is a great questions, and something we’re using more and more at our gym.

Here are a few things we track that are quick and easy:

Now obviously not every client tracks all those metrics, but those are some ideas to get you started.

For an Oly lifter, I would focus primarily on vertical jump (a great indicator of nervous system preparedness/recovery), and HRV. You do those two things, and you really have a good idea of how hard to push on any given day.

Q: Your blog post about the warm-up is awesome, in that light what would be the minimum that the olympic lifter should be doing everyday to get prepared for the platform?

Damn man, you always want the minimum Wil! (editor’s note: I do like the minimum effective dose)

In all seriousness, here are my minimums for a client/athlete:

That’s about as low as I’m willing to go. I’ve screened and assessed enough people to realize that if I go much lower than that, I’m sacrificing performance because they’re either not neutral prior to training, or they haven’t increased their readiness to an appreciable level prior to training.

Q: For the athlete who wants to dominate his or her sport, where do you see the Olympic lifts fitting in a complete program?

Even though I’m a powerlifter, I love the Olympic lifts. I always say that if I had been exposed to them when I was younger and more malleable, I would’ve chosen them over the powerlifts.

For athletes, I think the O-lifts can be a wonderful addition to their strength and conditioning program. And I see both sides of the argument of using them versus not.

Look, if you can’t coach them, don’t have the time/inclination, whatever, I get it – you don’t have to use them. You can find plenty of alternatives that work just fine. (editors note: I agree)

However, I think all things being equal, using the O-lifts in your program develops a nice blend between speed-strength (i.e. med ball work, jumps, etc.) and the strength-speed you can develop from the O-lifts.

Ultimately, I think it’s a very individual thing. It’s individual to you as a coach, the individual athlete in front of you, etc.

Q: Mike, you’re the guy that folks turn to from around the country to work with their athletes (NBA guys, pro soccer guys/women, etc), and you recently came out with a program for athletes. Can you tell us a little about your newest creation, Bulletproof Athlete?

Bulletproof Athlete (BPA) is a product that I wanted to create because I see so many strength and traditional athletes alike struggling in the weight room and on the field.

A lot of this isn’t their fault – they’ve never had a coach. They’ve never been taught how to move well.

And ultimately, they end up broken down and frustrated because the standard programs they’ve tried just aren’t working out for them.

BPA is the foudnational program that they never had. It teaches them how to mobilize and stabilize effectively.

How to produce movement where they should.

How to execute basic movement patterns.

And ultimately, the end goal is to make them super efficient. When I ran a Beta test, we routinely had people hitting 20, 30 and 40 pound PR’s on big lifts (with minimal training of said lifts) just by making them more efficient.

It’s not for everyone, but if you think you have little issues and inefficiences that are holding you back, BPA can help rebuild your movement foundation. When you go back to your standard programming afterwards, I guarantee you’re going to hit some huge numbers, while moving and feeling better to boot.

Note From Wil: I just got done with Nationals in Olympic lifting. Training at a really specific and high level for the last 12-16 weeks means that I have some nicks, and need some foundations again. I am doing the BPA program to get back some basic strength, and move better.
Category: Clean and Jerk, Olympic Lifts, Power Clean, SnatchBy wilJuly 30, 2013Leave a comment