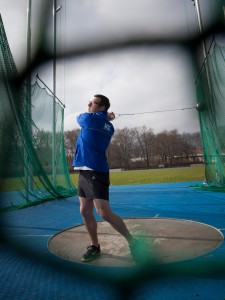 WF: Martin long time no talk man! It has been more than a few years since we last saw each other, but I am really glad you are here.  I tried to give you a little intro, but would you mind telling us a little more about yourself ?

MB: For the past few years I have been living and working in Zurich. I was born and raised in America, but I have Swiss roots and was invited to join their national team after I finished school. Travelling back and forth and trying to balance that with a job and training was too much for me, so I found a flexible position in Zurich that let me pursue my athletic career while also gaining some experience in my legal career. While I do not have a day-to-day coach here, I have still been able to progress and am inching towards 70 meters. I have also had time to start coaching more and have up a youth training group this year.

WF: Very cool man, I follow your results closely (because I know you) and have seen some great improvements in your throwing. Obviously you have had an awesome experience training with Dr. B in recent years. Can you tell us a little about what the experience of training with Dr. B has been like and how it has helped you progress as an athlete?

MB: I have always been a very independent athlete. I learned the event on my own and have sought out the best coaches to learn from.

I started researching Bondarchuk when I started college and had already created a training plan based on my understanding of his methodology when I heard he would was moving just across the border from me in Canada. I immediately started to arrange how I could meet him.

After my first visit in 2005 he volunteered to write my training program and I figured there would be no better way to learn from him. For the first few years I worked with him from a distance since I was still in school in Seattle. The last few years have been the same now that I am in Zurich. But even when we were training apart I visited him and had a chance lived full-time in Kamloops for two years after I finished law school.

Working with him has put a lot of perspective into how I approach training. To the unfamiliar his training methods, and the methods of most elite athletes, look very complex. It can seem almost overwhelming. But when you are with him every day you get the complete opposite feeling. What we are doing seems almost too simple. It is just the extrapolation of a few key ideas that permeate every aspect of training. Once I understood this concept it really changed my outlook on training design and has simplified my approach to coaching, working, and various other aspects. A complex state-of-the-art plan can easily be compiled from just a few simple parts.

MB: Special strength is just based on a simple concept: focus your training on things that will improve your event. There is no sense in wasting time on the bench press for a hammer thrower because it involves movements and muscles that are not utilized in our event. Bondarchuk has a hierarchy that classifies exercises from general to specific to the competitive movement itself. The range goes from:

At its simplest, the more advanced an athlete gets, the more specific their training becomes. Beginners can see their results grow after doing almost any exercise and for them general conditioning can be great. But elite hammer throwers need more specific training and the vast majority of our time is spent in the last two categories.

It is important to note that each sport is different. Elite athletes in some sports can get a high transfer from GE and SPE exercises. For example SPE exercises have a bigger transfer in the shot put than the hammer throw, and Bondarchuk lays out the transfer of many events in his books. In these other events, specificity and “special strength” plays less of a role. But these are the exceptions and the key is to understand what exercises provide the most benefit for each specific athlete and event. As a coach you need to keep an eye on this and not just do an exercise because everyone else does. You need to do it because it will actually transfer into better results.

“Special strength is just based on a simple concept: focus your training on things that will improve your event”TWEET THIS

MB: I am only familiar with Westside’s stuff from afar and I still do not know much about their overall periodization model. But their ideas on exercise selection, special strength, and the role of change in the adaptation process fit very well with Bondarchuk’s theories even though they are actually at opposite ends of the spectrum in their respective sports.

In the hammer throw the common trend is to spend a lot of time in the SPE category. Many throwers spend the majority of their time working on their squat or bench press and Bondarchuk has been pushing people to move more towards the CE end of the spectrum.

In powerlifting the problem is a little different since a lot of athletes already spend all of their time in the CE category. In this sense, Westside is advocating less specificity by doing, for example, sumo deadlifts or rack pulls instead of or as a complement to traditional deadlifts. But even though they are heading in opposite directions they still have the same idea in mind.

While CE has the highest transfer for hammer throwers, there is a reason it does not constitute all of our training. In order to get a good transfer you not only have to choose the right exercises, but also structure them correctly. Adaptation requires change and no matter how good one exercise is, it does not give you change if you endlessly repeat it. In this sense, change is actually more important than the exercise since if you always do the same exercises you will plateau and the exercise’s transfer will reduce to zero.

Having an arsenal of exercises that all provide a strong transfer is key to any elite training program. Then you can add variety that keeps the body continuously adapting and improving. We spend a lot of time in SPE, and even substantial time with SDE exercises because this gives us the variety we need to continue the adaptation process. And even within these categories we are changing.

One program might include heavy hammer releases as an SDE exercises while the next could replace it with bar twists. Snatch might be substituted for power clean, and so on. This is the area where I see the biggest similarities in Bondarchuk and Westside.

MB: Unfortunately there is still a lack of approachable information about Bondarchuk in English. I have written a lot about him on my homepage and have compiled a list of some of the more in depth posts there (http://www.mbingisser.com/training/technique-and-training/).

Bondarchuk has written many books in English over the past few years, but the translations are not always the best. I find that if you have a general understanding of him in the first place and read through them a few times, they are still a worthwhile investment. His Transfer of Training book is essential reading, especially for those involved with track and field. I have reviews and overviews of all of his books on my homepage too that might help readers work their way through them.

His two more recent books, available directly from him at NewTrainingConcepts.com, talk more about periodization. This is his other major area of contribution to sports science.

There are dozens of different periodization models and each have a slightly different adaptation process. No one is correct, but you need to find what ones work best for your event and your athlete.

For example, in the hammer throw maybe 3 or 4 models produce the best results. Choosing a model where you do not throw for 6 months would not be optimal because of the technique involved. Gymnastics is another sport where you need to be on the apparatus often. However in other sports you can choose one of the block periodization or other models that spend more time away from the CE.

But most important is that people try things out. His success is as much built on his experience as it is on his methods. Or, to put it another way, his experience has made his methods even better. You need a lot of feedback to see what works, what transfers, how long the athlete takes to adapt, etc.

The best way to learn from him is to try it out and see how it works first hand. You’ll likely make mistakes, but you will learn in the process. Working with Bondarchuk long distance does not always produce the results we want since he cannot get the feedback, but by just trying I have learned even through the errors we’ve made.

WF: Martin, thank you so much for your time man, this has been an awesome bit of information. Best of luck to you in the ring, and keep doing the awesome stuff you are doing for the sport of hammer and also for translating the important works of Dr. B to a language that other coaches can understand!!