At the intersection strength and speed lies explosive power. In terms of athletics it is an absolute game changer.  For this reason I have chosen to prioritize making my athletes more explosive over anything else.  To do that, I use a number of tools. Here are my top 10.

The snatch wins my contest for the number 1 explosive movement because it is a pure hip hinge pattern and a long impulse of power is needed to make the movement complete. I chose the hang snatch because the position on the ground in a power snatch can limit some athletes ability to perform the exercise.

Snatching in any form is a great indicator of coming performance.  Athletes that are prepared for an upcoming contest will see their snatch hit all time highs before competition. A particularly useful hang snatch is the hip snatch. This movement is all about finishing the 2nd pull aggressively and punching under the bar.

The jerk is the most under utilized movement that coaches have at their disposal.  The jerk generates more power than either the clean or the snatch, and is a tremendous movement to develop power through quad dominant movement.

Athletes can use the split jerk or the power jerk as a receiving position. Using the split jerk helps develop force absorption on the front leg, and for athletes legs should be cycled between reps.

3. Power Clean from a block

The clean gets a lot of love in a lot of programs and sometimes that brings with it a bad rap of having the potential to injure athletes. When done well  and coached well it can be a true game changer for athletes looking to become more explosive.

Doing cleans from a block is a movement to develop starting strength, and eliminates errors in technique that are associated with the countermovement to start the hang clean.

The clean pull/jump shrug is an awesome tool to use. At higher loads it is a great to develop improved power and familiarity for athletes in the Olympic lifts. When used at lighter loads it can actually generate more power than even the traditional Olympic lifts.

Use this for athletes that may have limitations in flexibility or when trying to reduce impact during in-season training. Be careful not to let the quality of the movement diminish when weight over 100% of 1RM is on the bar.

The typical kettlebell swing would be on my list as well, but when adding band resistance this movement becomes one of my favorite tools to improve the end range of hip extension. This movement has the added benefit of not having to purchase giant kettlebells to really get your athletes explosive.

I love throwing medicine balls and this is my favorite rotational medicine ball throw.  The linkage between hip rotation, core stability and the expression of power through the upper body is hard to miss. Make sure your athlete generates power through the lower body and rotates the back foot to finish the movement.

Although the prowler flu and the use of the prowler for metabolic conditioning are popular, I prefer to have my athletes do weighted sled pushes to improve their sprinting power. 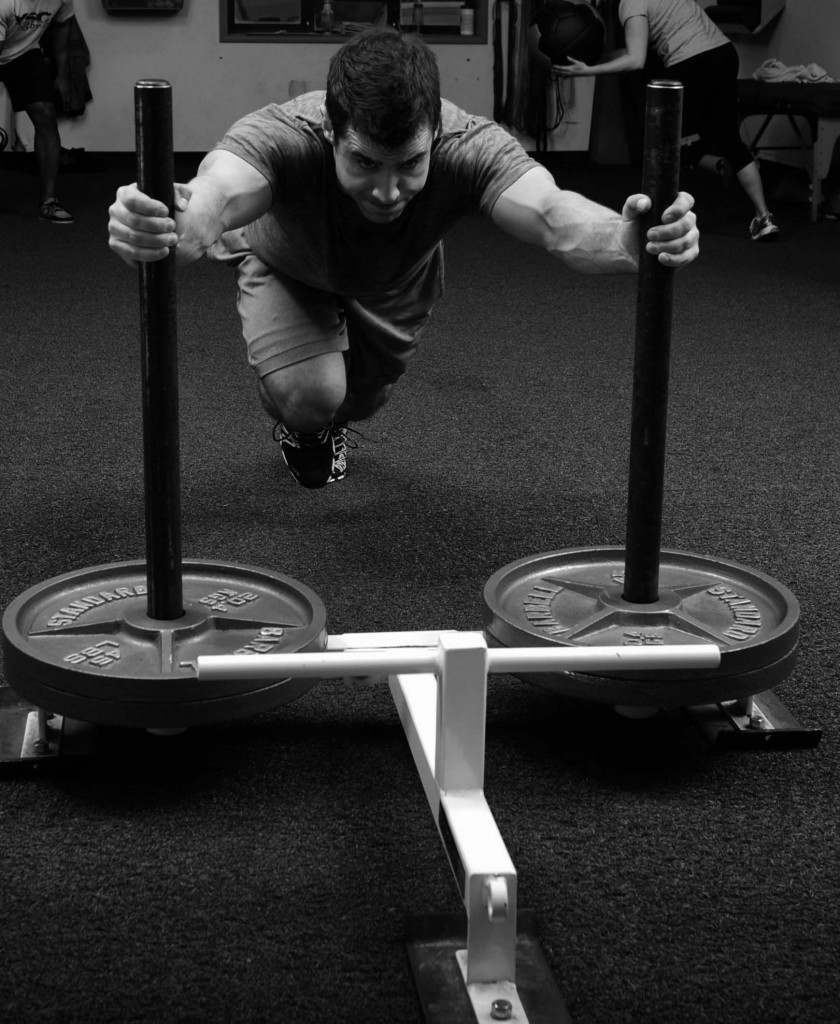 We use 20-30% of bodyweight for speed training and 50%- 70% of bodyweight using the high bar position for power power (each drive should be a maximal and fast effort).  Coach an active push to the ground. While doing this exercise at higher weights allow athletes to return to full recovery as designated by their heart rate.

The split jump can be done in multiple ways, but my preferred method is to do the exercise with a shortened range of motion and focus on minimal ground contact time and maximal vertical projection.  Cycling the feet can replicate the rhythm of sprinting, and is an excellent “single leg” (offset in this case) explosive exercise.

The seated box jump is one of my favorite training tools because it does a great job of eliminating the stretch reflex prior to jumping. From a seated position on a box of a lower height the athlete should sit and then explode to a box jump (or vertical jump). Eliminate all rocking before the jump and you will have a great tool for developing starting explosive strength in your athletes.

The double band press is one of my favorite tools to develop explosive upper body strength.  With one band around the hips and one at the hand level the athlete is forced to move from a hip hinge position to an extended hip position with explosive expression through the upper body.

There are variations on each of these tools that can be used just as effectively, and it is important to experiment with what your athletes like best.  Please let me know what you think I should have added to the list in the comments below.